contemporary classical music to audiences around the world.

The rich sound of Andersson's cello along with Larson's enchanting voice

will move you to tears and laughter!

Growing up in a little village in southern Sweden, Anna and Sanna met studying at the local music school. Over the years they performed in various ensembles together and created a musical and emotional connection. This led to the creation of En Vokalist & En Cellist.The duo has a passion for performing music of various genres. Adding an additional personal touch to their music, the duo often writes and arranges (Sanna Andersson Janfalk)  their own compositions.

In collaboration with Icelandic composer and conductor Gísli Jóhann Grétarsson, Anna has written various works for En Vokalist  & En Cellist, whom has premiered the music in Helsinki, Paris, Boston (USA) and Reykjavik to name a few.  New works are currently in progress.

In 2014 En Vokalist & En Cellist collaborated with Clone duo, Maria Finkelmeier, percussion, and Angela Shankar, clarinet, (USA) and toured in southern Dalsland, Sweden. The two duos have now officially joined their creativity and musical skills in the ensemble Quartet Kalos. In 2015 the ensemble was Artist in Residence at Scandinavia Cultural Center in Boston. The ensemble performed in Boston and New York City.

In 2014 the duo released their first album, Sagolik Jul, you find the album along with music from  En Vokalist & En Cellist´s 2016 summer tour Gröna Små Epli on Spotify, iTunes and Soundcloud etc.

In recognition for their high musical standard, dedication to their craft, and for putting their hometown Frändefors on the musical map in both Dalsland, Sweden and the world, the duo received in 2017 an  honorary award from Frändefors.

For developing and performing new repertoire for one voice and cello the duo has received awards and grants from The Foundation of Swedish-Icelandic Co-operation,Vänersborgs Councils  Cultur Award, Region Västra Götaland Cultural Affairs Committee, Nordic Culture Point and Byggnads Cultural Award. 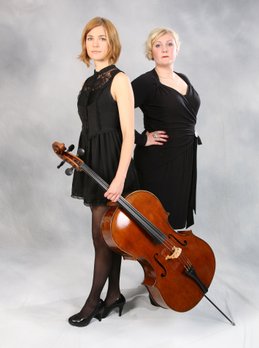